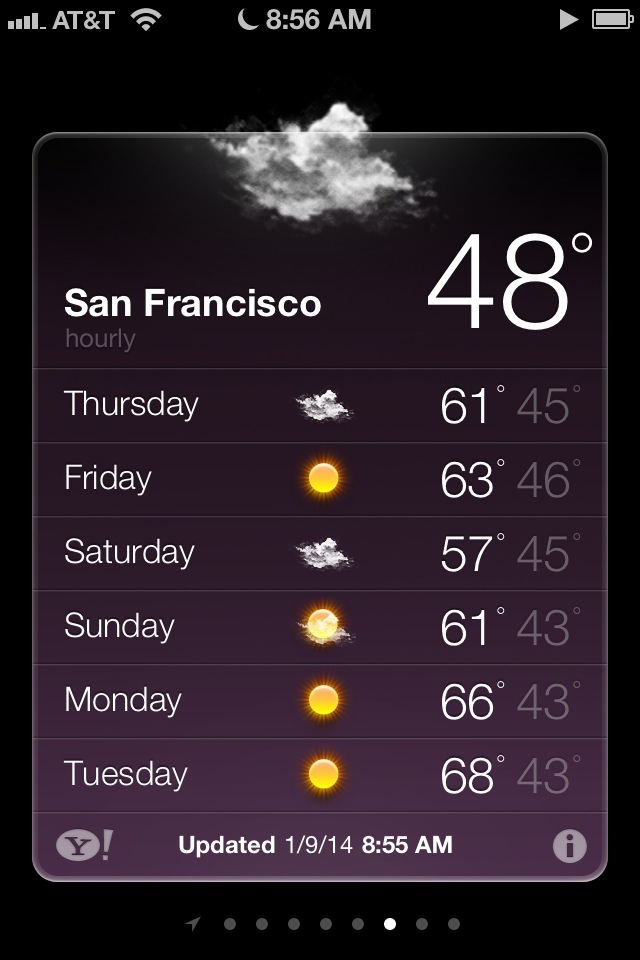 Now that my sleep calendar is beginning to return to normal, and I’m starting to take stock of the life that I’ve returned to, thought I’d jot a quick post. This is mainly new goals, but it will probably take a stream-of-consciousness vibe.

1) Stop mentally over-committing at my job. It’s counter intuitive, but I think I can actually get more done by simply not giving a toss, and just doing my work. It’s tempting to want to do every project to the max, but that’s mental energy better spent elsewhere, and I realized over the break I was wasting a lot of energy feeling bad for not following through on “mental commitments” I’d made. Be early for meetings, finish stuff on time, yes, but give a @#$%? DEFinitely not.

2) Now an interesting one. Figure out, in the hypothetical, how I could be bi-coastal starting tomorrow if I needed to. Challenge the assumptions holding me back. Do I really need more money? No – not if I negotiated remote work for two months-a-year from NYU. It wouldn’t even have to be that, because the holidays knock out about 2.5 weeks already. Just the beginning of December and the month of January. As with other things, I could start from the premise of negotiating a raise (which, I believe, I deserve – I wouldn’t broach it if I didn’t), and know I was willing to settle for more location freedom. Housing would be the problem. But would I really need to own two houses? Definitely not. Ferriss-style, if I had a terminal illness, and a doctor told me “you need to get more sun or you’ll die“, what steps could I take to make that happen?

My wife and I discussed this this morning as a fun mental exercise. Not that it has to happen right away, but it’s fun for both of us to think about how we would make wintering in SF happen, and challenge the assumptions holding us back.

3) More mundane: break tasks into whole days. E.g. Monday, Tuesday, Thursday I’m only required to do stuff for my job. Wednesday and Friday, I’m only required to do things for my business. If I decide to do more any day for “extra credit”, great, but certainly not required. Is it about intensity, and sprints, when it comes to business? Yes, of course, but it’s also about patience and sustainability. Nothing focuses the mind like coming back from vacation with jet lag. Your brain is only useful for “smart person stuff” an expanding window of a few hours every morning, and the rest of the day it’s “don’t trouble me with trouble, man – I’m gone.” Well the upside is it forces me to structure my life so I only need to make one or two important decisions every day.

4) Increase my earning power so as to pass the “minimum happiness threshold” – where money is not a concern – beyond which more money has diminishing effects on happiness. Yes, I’m hoping 8020 Drummer, and whatever’s next, eventually are earning enough to take a chunk out of my monthly living/travel expenses. But that’s not the only way. I have a game plan to wipe out a lot of my monthly expenses by March. As Ramit Seithi (sp?) says, “don’t give up the latte – focus on the lowest hanging fruit to increase your spending power. A lot of people who never once picked up the phone to negotiate a lower rate on their power bill or long distance, or a lower credit card interest rate are going without lattes.” I’m paraphrasing, but you get the gist.

It’s unlikely I’ll get a raise at my current job, though the patently obvious fact that I’m underpaid gives me a lot of negotiating leverage in other areas. Once you’re beyond the threshold of not needing to worry about money, time is just as important as money.

4) Get seriously better at Mandarin. I don’t want to go through another Taiwan trip where I’m speaking pidgin. I don’t have to master it, but the next trip I want to see some serious improvement in my vocab and ability to read. It will make me feel better.

Notice any music ones? Me neither. I feel I’ve got the music thing dialed in pretty well, and feel like I continue to improve extremely quickly thanks to the methodologies outlined in the 8020 Drummer. I do have the continued goal to play music with my heroes and to write music, and in creative music these days, for people like me who value their time and their lifestyle, you can’t really ordain the future more than that. True, I could have a goal to go on tour with a band or something, but I can do that any time I want. In truth, if I’ve got two weeks in Japan (stay tuned;) I’d far rather not have to worry about rehearsing, negotiating pay, equipment, etc.